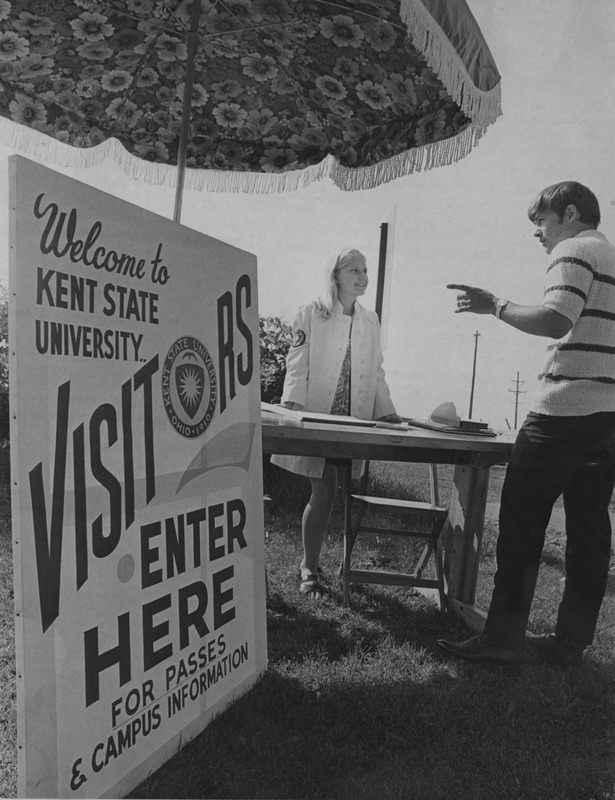 A visitor is greeted at a campus visitor post in June 1970.

Immediately following the Kent State shootings, President Robert White ordered that the University close. Then, on the afternoon of May 4, 1970, Judge Albert L. Caris of the Portage County Court of Common Pleas granted an injunction "restraining the administration of Kent State University from operating the University until this court is satisfied that said operation could be conducted in a safe manner." However, the injunction was modified to allow full-time faculty members and civil service and administrative staff to return to campus weekdays from 8 a.m. to 5 p.m.

With Kent legally closed, the faculty voted before the week was out to complete their courses by any means necessary. Students were advised to study independently until they were contacted by individual professors, most of whom were busy gathering materials that would be the first of numerous mass mailings to thousands of students. Although the end of the quarter was met with mixed reactions from students, the ultimate goal was for students to complete courses, and, in about 1,900 cases, to help them graduate. As a University-produced account of the times put it: "It would be impossible to go into all of the ways in which classes were conducted. The ways were as varied as the listings in the catalog of courses.”

On June 13, 1970, 40 days after the University closed its classrooms, 1,250 seniors and graduate students returned to the Kent Campus to receive degrees.

The Closing of the University →
Home